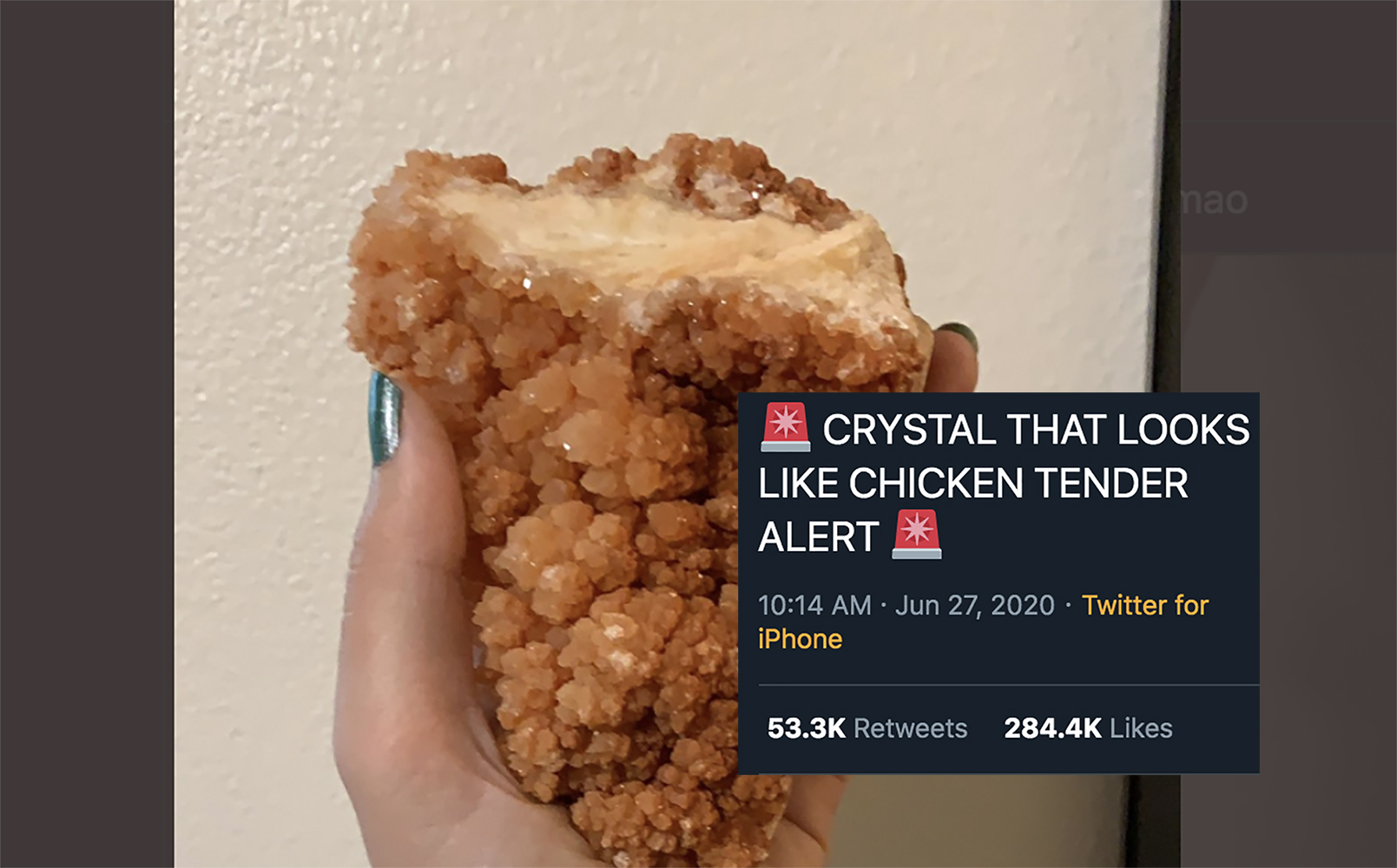 At the risk of sounding like a Facebook post from your least-favorite cousin, nobody can agree on anything anymore. Wearing a mask to the farmer’s market has become a hotly contested political issue. Peaceful protesters have been recast as rioters by those who don’t agree with whatever’s inked on the signs they’re holding. The wild-eyed personal injury attorneys who waved their guns at a crowd of people walking past their home are both the best argument for and the best argument against so-called Stand Your Ground laws.

But even now, at the beginning of this increasingly polarizing summer, pretty much everyone understands that the r/ForbiddenSnacks subreddit is consistently the best. Nothing may ever unite this nation the way a post from a user named u/rebelraf did over the weekend, nothing may ever bring us all together like this picture of a rock that looked like a chicken tender.

“Forbidden Fried Chicken,” she wrote, adding that she was actually holding a huge chunk of calcite. That picture also ended up on Twitter—although she didn’t post it—with the caption “CRYSTAL THAT LOOKS LIKE CHICKEN TENDER ALERT,” complete with two siren emoji.

The, um, crystal tender belongs to a 20-year-old gemstone collector and jewelry maker named Amelia, who never expected it to go this kind of viral. “I frequently buy crystals for my collection, but I did choose this specific one because of its resemblance to fried chicken,” she told VICE. “Ever since I was a little girl, I would always pick up rocks that I found enticing. I begged my parents to buy me the ‘fill a bag with crystals’ at various tourist shops. I didn’t start collecting larger pieces seriously until last September, but my collection has quickly grown from 100 or so to over 700.”

If you want to bring your loved ones together with a completely inedible tendie, you’ll need to find your own red calcite cluster, because Amelia isn’t selling this one. “If someone were looking for a similar piece, they’d be looking for a calcium carbonate mixture of calcite and aragonite,” she said. “It seems like the most chicken-like specimens come from Mexico, which is a great place for purchasing all sorts of calcite specimens.” (She got her crystal from a friend in China, but has since learned that it was “likely excavated” from Mexico.)

“Red Calcite is a vital stone that increases energy and willingness to experience life,” one online crystal vendor writes. “It is grounding and protects energetic and emotional boundaries, alleviating ‘spaciness’ and over extension of one’s energy.” The same vendor says that Aragonite “assists with emotional growth and self healing, while encouraging us to find the calm centre in our hearts.”

As of this writing, there are 87 listings for red calcite clusters on eBay, which range from a $5.99 version that kind of looks like a no-bake cookie, to a $999 three-pound stone from China. (“Hopefully every stone you buy is because of like rather than cheap,” the seller’s poetic description reads. “Just like marry is because of love rather than making do with that.”) Etsy has another 200-plus listings and, although some of them have been polished to shine, some seem to sparkle in the light, and some have been turned into fashionable pendants, none of them look like they’ve been breaded and deep-fried.

In Amelia’s opinion, a very close match can be found at Fossilera Minerals and, like hers, this specimen was found in Mexico. “It’s almost impossible for me to fathom that something so brightly colored and intricately detailed can be found in the earth growing naturally,” she said. ” I think that rocks and minerals are some of the most beautiful things nature has to offer.”

And we can all agree that the ones that look like chicken tenders are totally the best.

Get a personalized roundup of VICE’s best stories in your inbox.

By signing up to the VICE newsletter you agree to receive electronic communications from VICE that may sometimes include advertisements or sponsored content.