Restaurant Dress Codes Have Long Been a Tool for Racist Discrimination 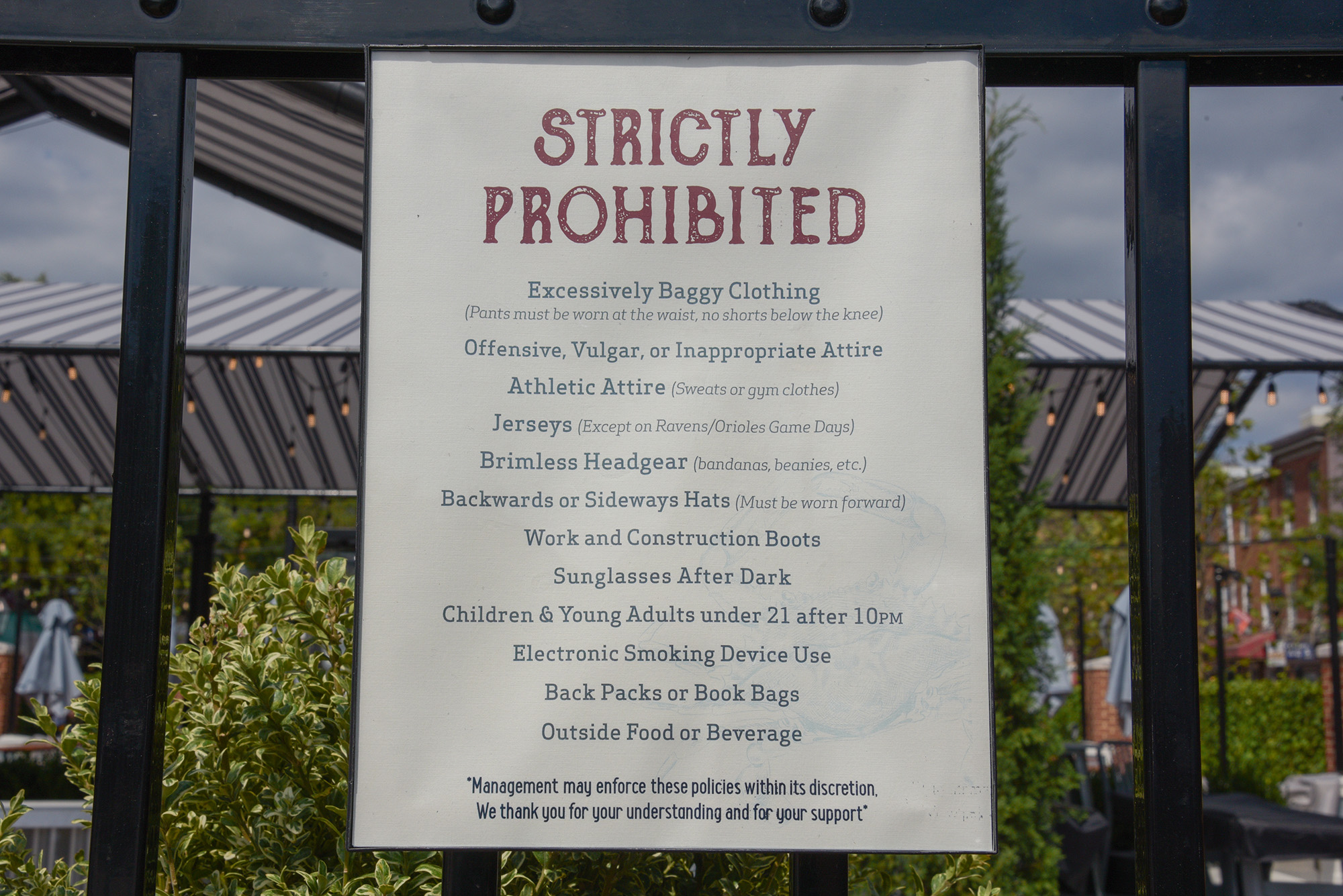 Last Sunday, Martha Grant went to the Ouzo Bay restaurant in Baltimore with her 9-year-old son, Dallas. The two of them waited for a seat on the restaurant’s outdoor terrace, before a tie-and-mask wearing host told them that he was very sorry, but Dallas’ T-shirt and shorts didn’t meet the restaurant’s dress code.

In the video that she shared on social media, Dallas was dressed like, well, a 9-year-old boy, wearing a black Air Jordan T-shirt, a pair of black shorts, and sneakers. Although Grant and her son, who are Black, were denied a seat, a white boy wearing a similar outfit had been allowed to eat at Ouzo Bay with his own family.

“Why does he get to wear athletic wear and my son can’t?” Grant asks in her video. “I just want to know why it’s different for my son?” (The wide-eyed host repeated that he would “love for” Grant and Dallas to come back to eat another time, but the restaurant didn’t allow “athletic” attire—and he said that he didn’t consider the white child’s T-shirt to be “athletic.”)

“We had to leave. They would not let my son in,” Grant said. “He’s 9 years old. It was so hard for him. He goes to a school that’s about 70 percent white. They always teach the kids they are the same. It was really hard for Dallas to see a kid that looked like one of his friends at school sit and eat there and he couldn’t.”

Atlas Restaurant Group, which owns Ouzo Bay, issued a statement apologizing to Grant for the “incredibly disturbing incident,” confirming that the manager involved had been placed on indefinite leave, and pledging to teach itself important lessons from its own discriminatory policies.

“[T]his past weekend’s incident at Ouzo Bay clearly serves as a moment that we will learn from and create change,” it wrote. “As a result, we immediately revised our dress code policy so that children 12 years old and younger who are accompanied by an adult will not be subject to a dress code at any Atlas property.”

But this wasn’t an isolated incident. Last September, Atlas Restaurant Group was widely criticized for the discriminatory dress code at The Choptank, another of its properties in Baltimore. The Choptank posted signs on its doors, warning would-be patrons that it would not allow entry to those in baggy clothing, athletic attire, brimless headgear, backward or sideways hats, or work and construction boots, among a handful of other restrictions. A note on the sign said that management would enforce the policies “within its discretion.”

The Chophouse faced a significant amount of backlash, including from the entire Baltimore Sun Editorial Board, which urged the restaurant to “immediately” rethink those rules. “Sure, the dress code doesn’t explicitly say that African Americans or other minorities aren’t welcome at the eatery,” they wrote. “But the way the code is written definitely leaves the impression that is the group of patrons the Atlas Restaurant Group, owner of the crab house and several other Baltimore restaurants, is trying to target.”

The restaurant made some minor edits to its policies, like allowing athletic wear before 10 p.m. and changing its restriction on “excessively baggy clothing” to a requirement that “pants must be worn at the waist.”

“We’re trying to keep an upscale atmosphere for our guests and we want to give them the best possible experience,” Atlas Restaurant Group CEO Alex Smith said at the time. “We’re going to enforce it for everybody—it doesn’t matter what race, ethnicity, or creed. We’re not going to budge on that.” (Smith’s father is Dr. Frederick Smith, a vice president, and director at the ultra-conservative Sinclair Broadcast Group.)

Atlas’ response to the incident with Grant and her son reads as equally opaque in regards to the group’s reasoning behind its policies. “[T]he dress code is too racist to be applied to children 12 and under, but not too racist for ages 13 and up?” one Twitter response read.

Dress code policies are perhaps the last “acceptable” way for restaurants and bars to scrutinize and discriminate against Black patrons, and those “at the discretion of management” disclaimers just serve to underline their purpose. (None have made their intent more clearly than a Chicago pizza joint that wrote “if denied entry, changing your appearance will not change the decision” at the bottom of its own list of restrictions.)

“It is dog-whistle racism and classism masquerading as a business practice,” the Black Queer and Intersectional Collective wrote in response to an Ohio bar’s dress code—and they and many others say it’s disingenuous to pretend otherwise.

“That’s what’s so insidious about institutionalized racism, it’s set up in a way that you’re gaslighted right away,” Toronto artist Isis Salam previously told VICE about the “dress codes” at the city’s nightclubs. “If you say something, they’ll be like ‘What do you mean, there’s a black guy already in there,’ because they’ve already hit their two-black-guy quota. You can’t even call them out about it, even though you can clearly see that it’s not really about capacity or about dress code.”

And, as Grant and Dallas learned, dress codes aren’t equally applied to all patrons. In 2009, a group of students from Washington University in St. Louis filed complaints with the Chicago Human Rights Commission, the Illinois Attorney General, the U.S. Department of Justice, alleging that a bar in Chicago allowed more than 200 white students to enter while stopping six of their Black classmates at the door.

The manager of The Original Mother’s reportedly told the Black students that their jeans were too baggy to meet the dress code, but when Jordan Roberts, who is white, literally traded pants with Regis Murali, who is Black, Roberts was allowed in—even though Murayi had been turned away just minutes earlier for wearing the same pair of jeans. (The bar later issued an apology to the students and agreed to undergo diversity training conducted by the Anti-Defamation League.)

For a study published in the journal Sociology of Race and Ethnicity, Texas A&M University professors Reuben A. Buford May and Pat Rubio Goldsmith selected six male volunteers—two white, two Black, and two Hispanic—chose their wardrobes, and sent them to 53 different nightclubs in Austin, Dallas, and Houston, Texas to see who would be allowed to enter and who wouldn’t.

The men, who were all between the ages of 21 and 23, were separated into three pairs. For each twosome, one would be dressed in polo shirts, casual shoes, and crisp jeans, while the other wore a brightly colored t-shirt under a hoodie, a long necklace with a medallion, and athletic shoes. The pairs were sent to the nightclubs at staggered intervals during peak evening hours. Disappointingly, but not surprisingly, bouncers turned the Black men away 11.7 percent of the time, at about twice the rate of the white and Hispanic men. who were each denied entry 5.7 percent of the time?

The Black men reported that they were told that their attire didn’t meet the dress code, despite the fact that similarly dressed white and Hispanic men were allowed to enter the same club. The Black and Hispanic men were also told to tuck in their necklaces five times, compared to once among the white participants. In his book, Urban Nightlife: Entertaining Race, Class, and Culture in Public Space, Dr. May suggests that dress codes have become a “mechanism through which a broader system of segregation is supported.”

“[T]he dress codes are ‘color blind’ measures in which they simply focus on styles of dress. Yet because African-American men, in particular, have adopted these styles, they are disproportionately affected by the implementation and enforcement of these policies,” he wrote.

“White patrons who simply wear styles of dress reflected in their middle-class upbringing benefit in that they need not consider dress codes. Although some African-American men are able to ‘crack the code’ given their middle-class backgrounds, ‘color blind’ dress codes continue to affect African-American men disproportionately. Thus some scholars indicate that ‘color blind’ racism is more pernicious than overtly racist discriminatory practices existing during periods in American history like Jim Crow.”

Back in Baltimore, the fallout from Ouzo Bay’s haphazardly applied policy has continued. In an op-ed for the Baltimore Sun, Maryland State Senator Jill Carter wrote that she had “witnessed racial discrimination firsthand” at two of Atlas Restaurant Group’s other properties, and she has called for a citywide boycott of all 15 of its properties.

“There are a pattern and practice of discrimination with Atlas,” she told CBS Baltimore on Monday. “If you do not want to have business from Black people in a majority-Black city, this is not the right city where you should profit.” (In a statement, Atlas said that it was “incredibly unfair and unwarranted” for Carter to refer to the organization as racist.)

Atlas has since dropped the dress codes at the two restaurants it operates inside the Four Seasons Baltimore, a decision that came after the hotel said that it was “appalled by” what had happened to Grant and her son. “[W]e have shared our dismay about the event at Ouzo Bay with the leadership team at ARG as they work to ensure a culture of respect and inclusion at all of their restaurants,” it wrote.

A spokesperson for the Grants shrugged that right off. “We are beyond an apology,” she said. “Mentor him about what? … Maybe Dallas should mentor him.”